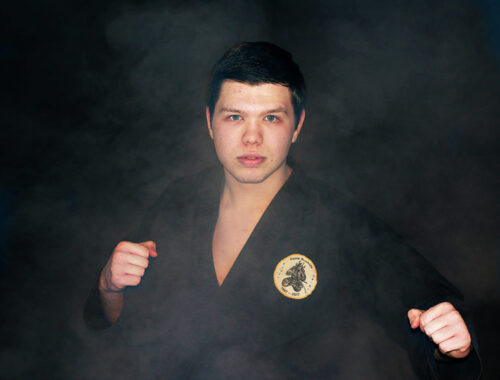 George started at the tender age of 10 having previously trained in karate for a short time before he found Ju jitsu. Realising that learning two martial arts at the same time was becoming too difficult, he made the decision to focus on Ju jitsu and achieve his childhood dream of becoming a black belt.

George finally gained his black belt after eight years in 2019 under some of the top Ju jitsu instructors in the UK.

Starting as a junior and gaining my Black belt in front of Sensei James Pape 10th Dan was a great honour for me. My skills are adapting to pressure while competing and finding the right technique to go on and win.

At college and studying public services with the dream of becoming a police officer.

George is a great technician of Ju jitsu throws and has a passion for competing.