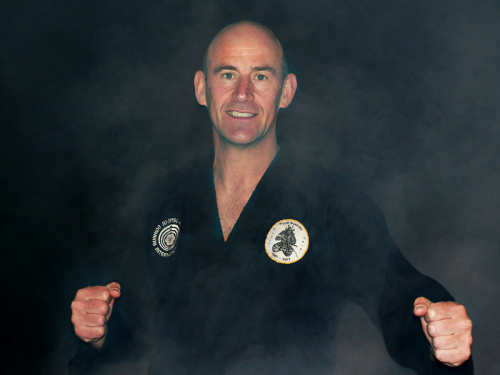 Training since 1987 and a formidable character on the martial arts scene, Andy’s love of Ju jitsu started way back in Leeds. From that very first time stepping on the mat he was hooked. Now a 5th Dan instructor, his love is now passing on his knowledge to fellow students.

Andy’s love of all martial arts has put him in good stead in Ju jitsu, winning numerous golds & silvers in the British Ju jitsu & United Nations of Ju jitsu Championships. He has regularly competed around the country in Judo, BJJ & Mixed Martial Arts.

Andy started Ju jitsu in Leeds way back in 1986 under Sensei Peter Clarke at the Leeds Kodokan Ju jitsu Club. He then moved to Dorset and joined the Bushido Academy.

Loves the great outdoors, photography and walking. Travelling & holidays are his passion.

I met Andy at a Judo class and from that very first encounter we went on to dominate the British Ju jitsu scene for a decade, winning every competition we entered.

Being on the mat is natural to me, wearing a Gi gives me a sense of pride and honour. After thirty years of training I still get a buzz every time I step on the mat. Competing in Ju jitsu around the country and abroad improved my skills which I still pass on today.